The browser you are using is out of date and not officially supported. You may encounter problems while using the site, please upgrade for a better experience. 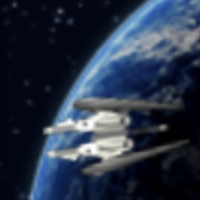 Math Controller is a tactical, sci-fi game where you are responsible for the flight paths of several space ships that are coming in for a landing. In space no one can hear you give commands on where to land, that is why they rely on flight paths that are drawn on the screen by you, their newest space traffic controller. Take control of the skies and line up several flight paths to get the alien space-ships into the docking bays. For bonus points you can try and aign the ships with the floating cargo crates in space. But whatever you do just please make sure that you keep the space ships away from the random asteroids that are flying through the level. Good luck and have fun commander.

Observe the flight paths of the various space-ships on screen and then deduce the flight path you think will best help them get home. Use your mouse to click on the plane and then draw a flight path towards the docking bay. Avoid the random asteroids and try to pick up extra points by collect the cargo crates floating in space. In between each level you will have the opprotunity to answer five math questions of the grade level and skill type of your choice.

Check Out Our Other Games

If you notice any problems, please let us know.